This month I built and launched Snormal, a wonderfully normal social network for normal people. Snormal is for posting about everyday normal thoughts and feelings, instead of ultra edited life highlights like you'd find on other social networks.

It's not uncommon these days to be slightly fed up with social media. Since I downloaded Instagram in 2014, the enjoyment I get from using it has steadily declined, up to the point where it's now uninstalled from my phone. I think this has happened for a few reasons:

There's a really great conversation Elon Musk and Joe Rogan have about social media which sums up the FOMO aspect of Instagram. Elon monologues:

"People are posting pictures of when they're really happy, they're modifying those pictures to be better looking. Even if they are not modifiying those pictures, they're selecting them for the best lighting, angle. People basically seem way better looking than they are, and way happier seeming than they really are. So if you look at everyone on Instagram you might think man, there are all these happy beautiful people, and I'm not good looking and I'm not happy, so I must suck, and that's gonna make you feel sad. So when in fact, those people you think are super happy, actually not that happy. Some of them are really depressed, they're very sad. Some of the happiest seeming people, actually some of the saddest in reality."

The idea of a social network that encourages the opposite sort of posts from those that you'd find on Instagram seemed really interesting. I decided to build a platform where people are encouraged to post about their everyday normal struggles that usually you wouldn't dare post about. This way normality is normalised, and people might not feel so alone & alienated scrolling through a feed.

I spent the next month building out this random idea, launching it, and coming out the other side. Here's the story of Snormal: a wonderfully normal social network.

I started off this build using the same strategy as I have used for previous builds: buying a domain name. I thought long and hard about what I wanted to call this social network. The idea for "Snormal" came to me when I was driving to my girlfriend's flat. I burst out laughing when I thought of it. The word Snormal is really fun to say, but at the same time it also weirdly sounds like a pompous tech startup.

I bought "snormal.com" for £10 on my phone as soon as I parked my car.

How do you design a social network that encourages normal posts, instead of ultra-show-off "highlight reel" posts (e.g. flashing your ripped abs on a beach in Ibiza).

It's really tough to encourage normal posts. One initial thought I expermented with was "exploding posts". The idea was when a post received a certain number of likes it would explode and disappear forever. This would theoretically stop popular posts, but at the same time would leave Snormal with very little content.. Besides, a post can receive likes because its relatable, not because it's trying to show off.

In the end I went for the following combination to stimulate normality:

As a side note: one app that I've started using recently that breaks the standard social media newsfeed mould is Tik Tok. Instead of a newsfeed, Tik Tok uses an algorithm to show you interesting content. It's scarily addictive, and it seemed like an interesting challenge to construct something similar for Snormal.

Okay, time to address the elephant in the room. Tiny Projects, where have you been for the past month?!

Well, it's been a combination of things. I started building an AI trader but didn't really like where it was heading, I've moved from my quarantine hideout back into my own flat, my regular job has been v. busy, and overall: Snormal took quite a while to build.

Snormal was built using Angular & Firebase. This has slowly become my ultimate combination when it comes to building web apps, I can build prototypes so quickly now.

However, with Snormal I found myself learning so many new things about this framework, I sort of went on a whole separate journey. I'll list some of them below:

These things will save me so much time going forwards when building new things. Building Snormal has definitely upped my developer skills, which is something I didn't really expect. I am happy I invested my time learning, even if it took a bit longer to get this project out there. 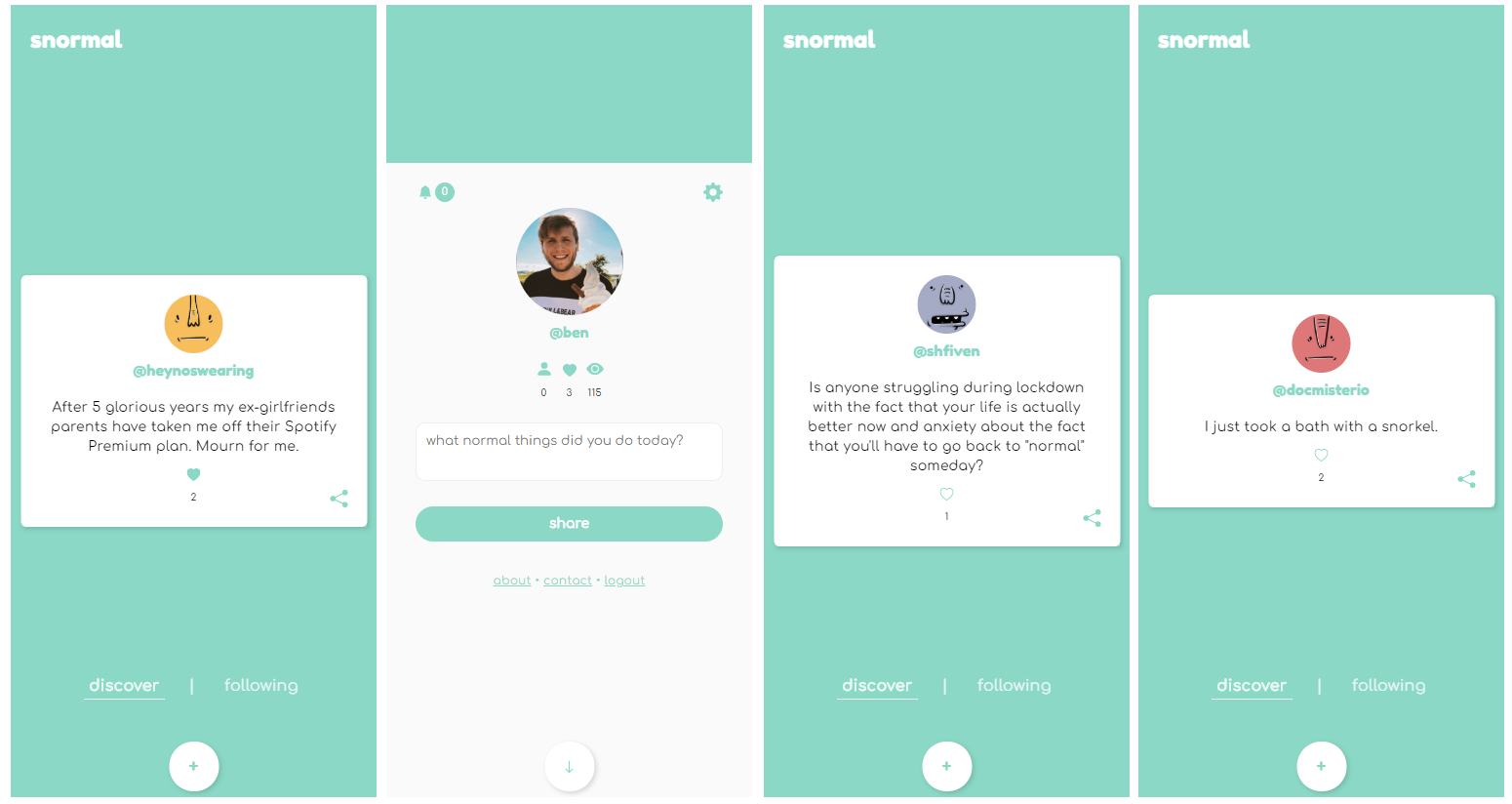 I'll briefly skim over Snormal's features, as it would be a very long post otherwise. Snormal has basically everything you need in a social network:

Probably the only things missing are comments, hashtags and direct messages, otherwise Snormal has all the social network fundamentals.

This post is also delayed because I wanted to put Snormal live and document the results of acquiring users. I'm planning to do this with all future Tiny Projects as it's probably the most interesting bit.

In short: the launch was a bit of a disaster.

For some backstory: on a whim I put my previous project (One Item Store) on Product Hunt. It actually did fairly well, reaching the popular page with 81 upvotes. I was pleasantly surprised by this, and decided I'd do the same for Snormal.

If you're unfamiliar with Product Hunt, every day at midnight the website refreshes and a new competition begins. Users post products that they've made, and they compete to get the most upvotes by the end of the day. There is an obvious advantage to posting at midnight: your product will get the maximum 24 hours of exposure and is more likely to float to the top of popular page quicker. As a result, your website will get more users.

I finished up Snormal at midday on a Friday. After populating the discover feed with about 50 initial posts from fake users, I spent the afternoon creating a professional Product Hunt post. This included animated gifs, good screenshots and a well written product description. My plan was to schedule it to go live at midnight on Monday (avoiding the weekend as its usually a slow time to post). This is where disaster struck: It was 5pm, and I had got to the final stage of uploading Snormal to Product Hunt. I was presented with two options: "post now" and "schedule". Instead of hitting the "schedule" button my insticts caused me to hit "post now". There was no "are you sure?" prompt, Snormal was suddenly live and visible for the world to see.

I was absolutely gutted, I did not want it to go live so late in the day, as this would be a massive handicap to getting exposure. After several frantic Google searches looking for a way to remove a Product Hunt listing, I discovered it was impossible. RIP all that time building Snormal.

I don't know what made me hit "post now", but it looked like I had to roll with it. I decided it was obviously a sign from above, and hopefully Snormal would speak for itself and still get some traction. I made myself a cup of tea and strapped in: it had suddenly become launch day.

I decided to timeline what happened as the launch was so chaotic:

Snormal went on to receive 50 upvotes on Product Hunt, which I'm really happy about from such a late launch. But, its also very frustrating, as I think it could have received a lot more. However, waking up the next day it was great to see user sign up emails in my inbox: 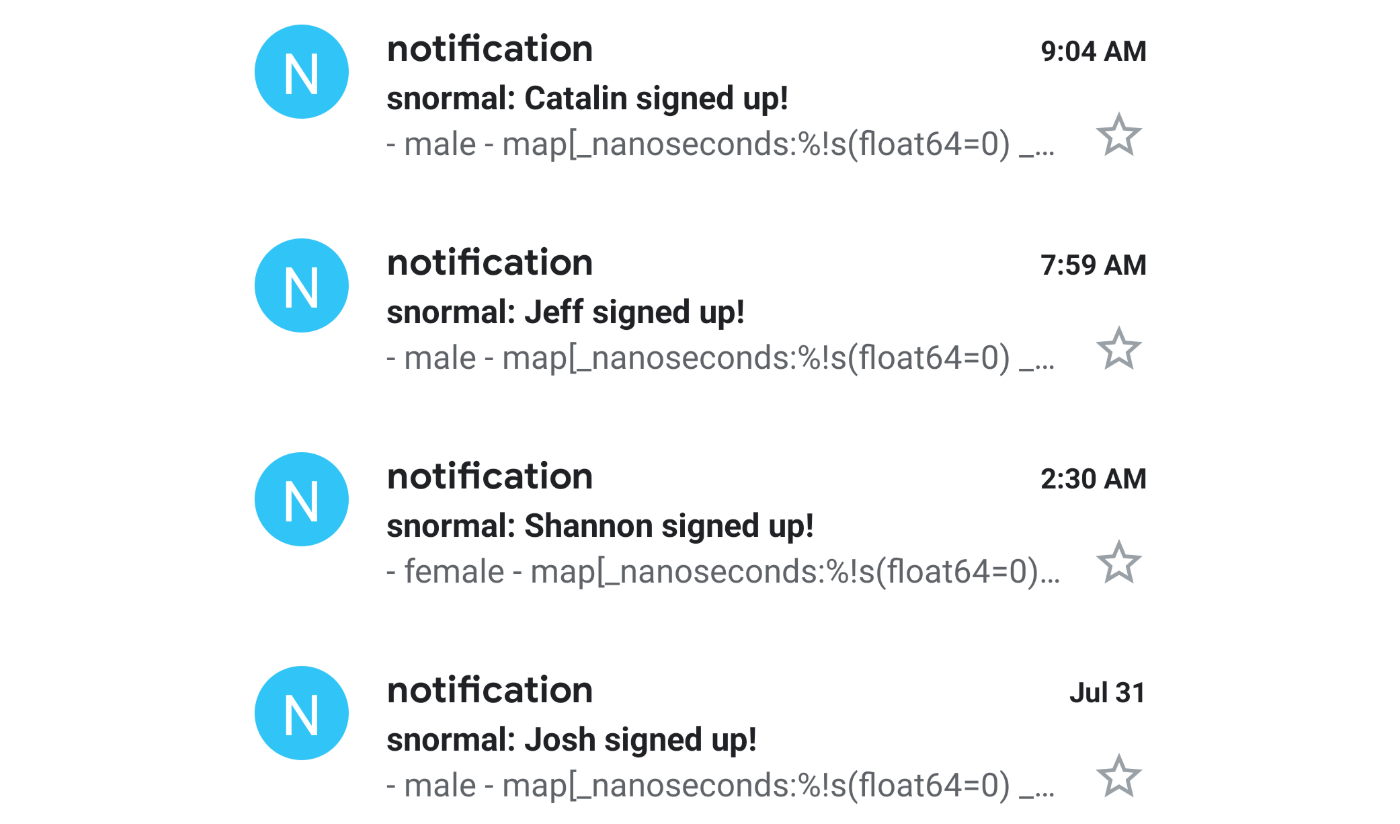 I was at a party on Sunday night and decided to check on Snormal whilst I went to go to the bathroom. To my delight I scrolled through and saw that quite a few people had been posting about normal things, which was such a cool feeling.

Snormal now has 10 users and counting, which is not much, but still pretty awesome.

The question I have now is: where on earth do I advertise to get more users for Snormal? Do I even want to bother growing Snormal?

The answer to the latter question is probably not. I don't think Snormal is going to ever blow up, mainly because I've come to realise normal content isn't actually that exciting (surprise). It's also surprisingly hard to post about your normal everyday life. Try it: you almost stop yourself because it seems too boring and trivial to talk about.

So here we are, Snormal: a wonderfully normal social network. I'm happy with how Snormal has turned out. The website (especially on mobile) is one of the cleanest looking things I've ever built. The tech is also solid. Previous Tiny Projects have launched with bugs in, whereas with Snormal I'm confident it can grow nicely without much maintainence.

"A social network for non highlight reel content". Was this a good idea? After a month of building Snormal: No. It was a nice idea though.

I've fallen into the classic developer trap of building something for potentially a non-existent audience. But hey, it might find an audience some day.

Wacky products like Snormal would never exist if it wasn't for something like Tiny Projects. An anti-social network is such an strange idea, I don't think an entrepreneur would pay a developer to make it, and I don't think a developer would build it on their own except for fun. In that sense, I'm happy it now exists in the world.

Next time I want to build something that actually solves a problem, and can make some money. I'm going to work backwards: Find an audience, find a problem, sell the solution.

Until next time, thanks for reading.